Tobias the Adequate  is the “Persona au Gratin” of entertainer Matthew Legare – the product of close to two decades of improvisational and interactive performing at hundreds of fairs, festivals, markets and other events throughout California, Nevada and Oregon

Tobias is part magician, part philosopher, part hero, and mostly a loud fat man in a series of outlandish hats and costumes, armed with an arsenal of magic and rapid-fire wit making him both amazing and amusing, often at the same time! 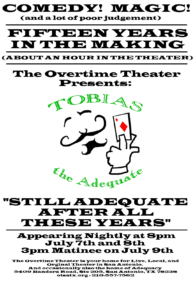 Matthew Legare has been performing pretty much as long as he can remember – getting his start as the “substitute sheep” in a local church’s Nativity Play by virtue of being the only kid small enough to fit the costume.

As a somewhat more mature fellow, Matthew graduated from the University of Texas at Austin with a BA in Drama and set out to make his fortune in California in 1992.

Sadly, someone else had already made it, so he instead set out to learn his trade at the numerous Renaissance Fairs and festivals up and down the state.

The Tobias the Adequate Show made its first appearance at the Marin Heart of the Forest Festival in 2001, and there’s been no sign of it stopping.

Matthew has also appeared at events in California, Nevada, Oregon, Washington and now back in his home state of Texas, bringing his unique blend of comedy, magic, improvisation and confusion to a growing number of amused and bemused audiences with a show which is, by his own admission…

DANGEROUS AND MORE THAN A LITTLE STUPID!