The Adventures of Captain Cortez and the Tri-Lambda Brigade returns in December with new episodes!

Narrator: (deep Hollywood voice guy) Far in the future, like…really, really far, Earth exhausted its resources and travel to the stars was our only hope. Launching our race into the heavens we found a new galaxy to call home, New Eden. But like humanity does, we have brought our wars with us…we are now divided now into several feuding colonies. The race to the stars continue and we are on the verge of galactic war…and only one group stands in its way…Captain Cortez and the Tri-Lambda Brigade!!! 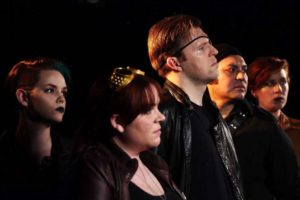 And so began the adventures of Captain Cortes and the Tri-Lambda brigade at the Overtime. Across four exciting seasons and a full length show, audiences were thrilled as our heroes prevented galactic warfare between feuding colonies and the distruction of the universe by cunning and intelligent villains.

Starting New Year’s weekend, join us as we meet the newest captain Cortez (the name is the most important thing for the inspiring necessary fear) and the small band of the Tri-Lambdas who are continuing the mission to keep the universe safe.

There will be something for everyone. Faithful audiences will see all the characters again and new audiences will get to meet the residents of this star system for the first time – you don’t have to be a fan of the original series to follow the story or to fall in love with these quirky guardians and cheer as they foil the plans of evildoers across the galaxy.

Scott McDowell’s writing ranges from the slapstick comedy to tender death scenes and everything in between. A lover of science fiction and comic book heroes, he has created his own world and invites us along for the ride.

Grab your Skittles and come over to the Overtime Theater each Friday or Saturday from December 29 to January 20 at 8 PM to see four new episodes of captain Cortez!

Who is the show for? Lovers of science fiction, fantasy, fan fiction, comic books, and action movies.

Rating: PG-13 for language (usually using substitute words), lots of fantasy, fights and no restriction on the thematic material.

Tickets: $10 at the door or online at https://cortezechos.bpt.me/