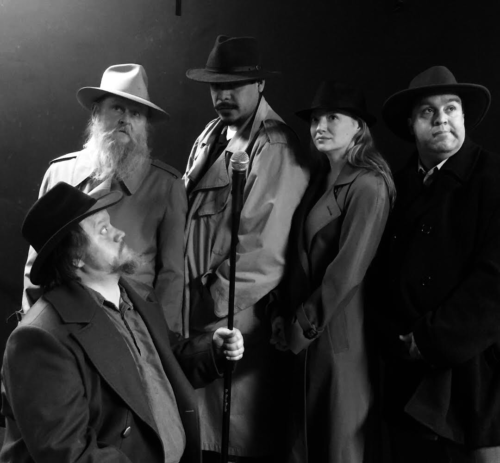 Written by an author who was raised on the Muppets and dozens of other subversively silly influences, Matthew Legare, is excited to bring this show to life. Legare states, “I started listening to comedy albums in my very formative years – you could check out tapes from the library and they weren’t too worried about the contents of those tapes back in the “Benevolent Neglect” years of the 70’s and early 80’s.  I found out about Firesign Theater, the Goon Show, Duck’s Breath Mystery Theater and a bunch of other audio performance groups while I was in college and spent far too much time listening to those. Thrash is an homage, a tribute, and an attempt to write that kind of wacky, surreal, yet somehow maybe even a little smart kind of oddball comedy that helped form my sensibilities when it comes to humor. I love the noir genre and I love screwball surrealistic comedy.”

There really was a Thrash Crankshaft. It was a little auto repair shop in Austin, Texas on South Lamar Street. Legare used to drive past it on his way to college and he thought it would be a great name hard-boiled PI name.  After 28 years he’s finally taking the one-off gag and turning it into a show. Legare says, “I’ve done my best to abide by all the noir standards – a Good Girl, a Bad Girl, some shadowy figures, an adversarial relationship with the police, gorillas in suits.”

On the show being a radio play, Legare states “I love not having to wrangle the budget to make all the stuff that happens in my head visible when I can just suggest it and let people fill in the pictures made by the sounds I’m using. This show is perfect for The Overtime Theater and I am so glad to have 28 years of thoughts out of my head and on the stage.”

Do YOU have a show, service, or silly 15- to 60- second radio commercial YOU want to expose LOTS of unsuspecting theater goers to? Do YOU want to support Live, Local, and Original theater in San Antonio? If so, contact the Overtime Theater because we have JUST the place for those ads in this show!