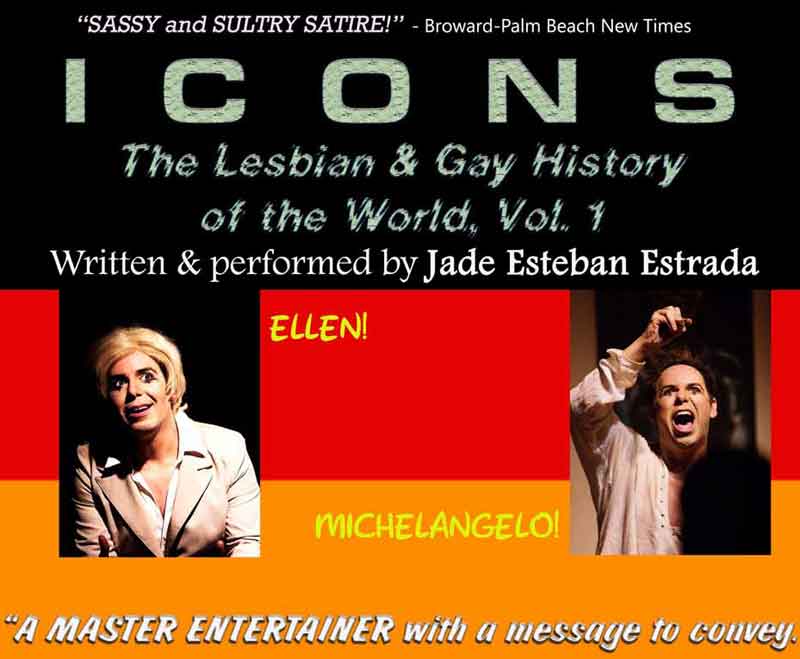 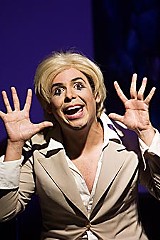 After an extended run last year, The Overtime Theater is proud to announce the return of the widely-traveled LGBTQ history musical, “ICONS: The Lesbian and Gay History of the World, Vol. 1” by solo theatre artist Jade Esteban Estrada for a special weekend engagement.

“…an actor, singer and all-around diva. Characters like the sultry Sappho, the wise Stein and the flamboyant Wilde speak to the audience from their own respective time periods, focusing less on their sexuality and more on their lives and perspectives. It’s funny, stirring and even educational. Estrada is a bit of an icon himself.” – Houston Press

The show is a two-night engagement running June 1st and 2nd at 8pm and will kick off National LGBTQ Pride Month.

“ICONS” is the first of five installments written and performed by Jade Esteban Estrada, who began his solo theatre career at Jump-Start Performance Company in 1997. Estrada is the creator of 19 solo shows including “A Lullaby for Ryan: The History of HIV/AIDS in America” and “Tortilla Heaven.”

“ICONS” made its world debut at the Columbus National Gay and Lesbian Theatre Festival in Columbus, Ohio in September 2002. The Columbus Dispatch calls ICONS compelling…Broadway-caliber.” “Estrada knows how to draw an audience in and hold them in the palm of his hand,” writes Deborah Martin of The San Antonio Express-News. “Without a doubt, the best entertainment dollars I spent this year went to “ICONS: The Lesbian and Gay History of the World, Vol. 1” with Jade Esteban Estrada,” writes the Tampa Bay Gazette.

Other solo performances in San Antonio have included “The Agony and the Ecstasy of Steve Jobs” at the Woodlawn Theatre in 2013 and “The Kindness of Strangers” at Woodlawn Pointe in January of this year. “Jade Esteban Estrada knows how to fill the stage all by himself,” writes The San Antonio Current.