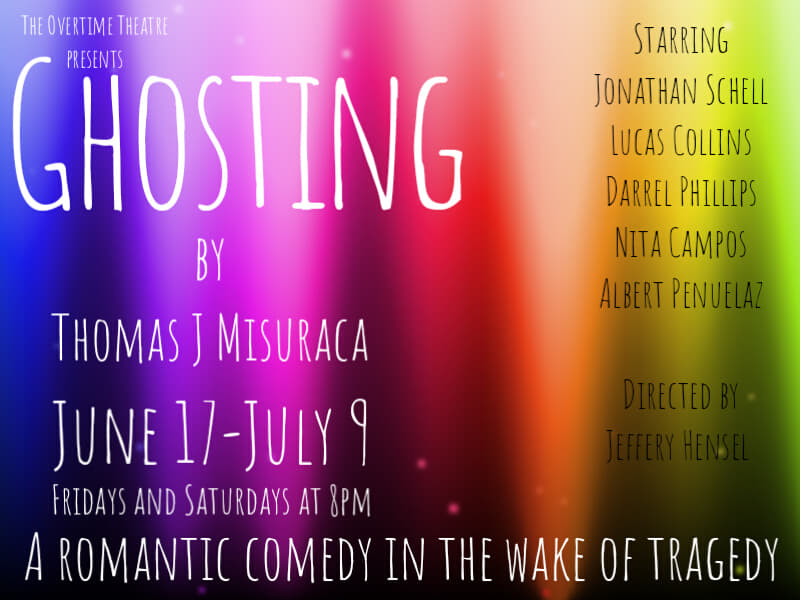 Dedicated to providing original, innovative, and accessible entertainment at an affordable price, the Overtime Theater is proud to present Ghosting. This along with The Reverend Dr. Paul(i) Murray and other productions at the Overtime in June are a part of our pride series.

After the death of his husband Todd, Jeffrey, a middle-aged man, hires Brandon, a struggling writer to finish his late husband’s plays in an effort to secure his theatrical legacy. Though Brandon sees this as a temporary job and a chance to get paid to work on his passion project, sparks fly between the young man and the still-grieving widower. In his ghostly form, an ever-optimistic Todd does his best to encourage the match until Brandon discovers an intimate diary detailing Todd and Jeffrey’s final days together. With the help of best friends Carol and Gavin and Todd’s otherworldly approval, the couple find their way back into each other’s hearts while also finishing Todd’s unfinished works.

The show will run for ten performances: Fridays and Saturdays at 8 p.m. June 17th to July 9th, 2022 in The Gregg Barrios Theater. The Overtime Theater is located at 5409 Bandera Road, Suite 205 on the city’s Northwest Side. General admission tickets are $18.

Get your tickets here: